Setting up the classroom

This is what my classroom looked like last week. I planned on taking more pictures yesterday, but I fell off a chair and bruised my back pretty badly when I hit it on the radiator/shelf and went right home. (Don't we always tell kids not to stand on chairs?!) I'm going to spend a few more hours today after professional development. 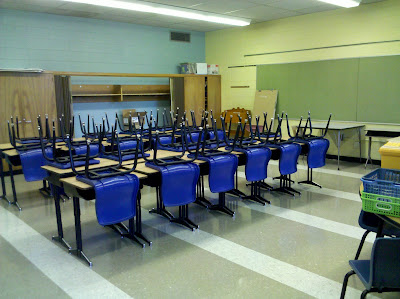 To the left are the closets. I don't have a sink :(  The green boards are not chalkboards, they're bulletin boards. Right now there are 24 desks. They were in 2 rows of twelve, too big for me! My class list has 21 right now, so I changed it to 3 sets of 7. I'm really not happy with it, but the room is so narrow I'm not sure I have a choice! 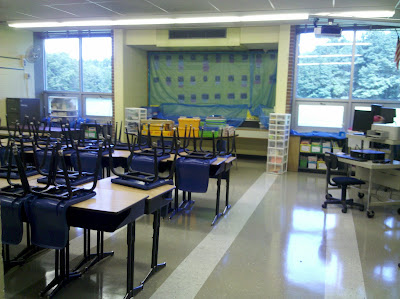 The previous teacher was moving to a bigger classroom, but hadn't yet...so that's her stuff. My desk is in the top left corner. The bulletin board (which will also be my word wall) is in an alcove with a counter. I moved the kidney table to the back of the room. 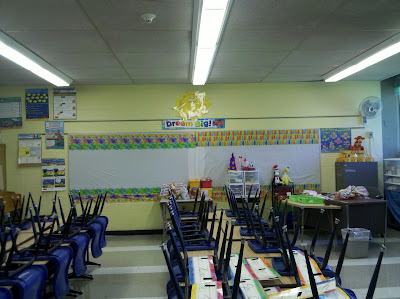 My room is pretty small, so it doesn't have a lot of wall space. This is the back of the room. I used table cloths instead of bulletin board paper and borders. My alphabet hasn't been used in 3 years and as you can see, it is on the desk and not on the wall...because it pretty much got ruined when the velcro melted onto other pieces.
Outside of being in the classroom, I am super excited about a few things I ordered from Really Good Stuff: 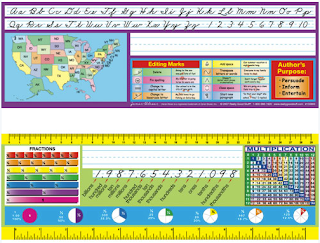 They're double sided name plates that come with adhesive sleeves. No more taping them to the desks just for the kids to peel it or write on the tape! What I love is that I don't have to worry about covering the multiplication tables when they take a quiz...they can just take the name plate out of the sleeve and flip it to the other side! 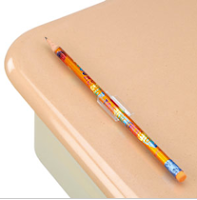 Self-adhesive pencil clips...I really hope that this solves the problems of dropped and missing pencils...which is such a pet peeve of mine! Most janitors just sweep them up if I don't find them and pick them up at the end of the day. 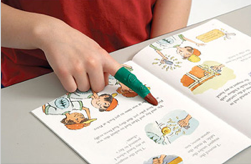 I was kind of on the fence about these finger pointers, but since they cost $6.99 for 32, I gave it a shot. I'm really focusing on getting 100% attention 100% of the time. Anyway, they're called martian pointers, but I think everyone thinks they look like witch fingers. I think I might get creeped out by them, but the kids will definitely be into them...at least for a little bit.
I just completed my activity sticks! I am super excited to use them. My prediction is that eventually my students will memorize the activity and its stick color so that they can somewhat easily guess what they are, even though there are a lot of them! 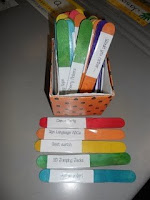 I am finished with my word family egg center too! I just wrote on them with a Sharpie! Some day soon I'll post a list of the families on them so you can easily make your own. 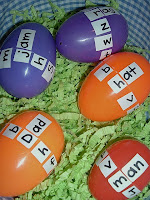